How to Paint Alpha Legion

Hey all, Gregg here with a guide on how to paint Alpha Legion in the 30k colour scheme! To say I’m a gaming enthusiast would be the understatement of the century… I’ve collected Warhammer 40k all throughout a (misspent?) youth and into a (misspent?!) adulthood, with the mandatory brief hiatus during my student days.

I promised Battle Bros Chris and Ian that I would write a guide on how I paint my Alpha Legion for Horus Heresy, so after much procrastination here goes!

This method follows the Forge World technique as closely as possible for the metallic green-blue scheme they went for on the Alpha Legion models shown on the Forge World website. I’ll use some work in progress pics for my own Alpha Legion Glaive to show the different stages that I go through to achieve this look.

I will stress that you will need an airbrush for this method (as trying to use a normal brush for the airbrush steps gives a much darker, less transparent turquoise colour. Thin, transparent coats are key here in order to blend the blues and greens together, which is made possible by using the airbrush).

I’ve included a list of all the paints I used for my Alpha Legion painting guide below, some of these can be easily swapped out or substituted for similar paints and should still achieve the desired effect.

As always when working with Forgeworld models, make sure that you thoroughly clean resin with warm soapy water. Once the parts have been left to dry remove all the mould lines, and assemble as usual.

I always start with a Black undercoat

Apply an even coat of Vallejo Game Air Chainmail Silver across the whole model with the airbrush, making sure that you hit all recesses.

Using masking tape or blu-tac, cover over all the areas you don’t want to be coloured turquoise, e.g. gun, tracks, engine etc.

How to Paint Alpha Legion in the Iconic Blue/Green

Create a mix of 90% Tamiya Clear blue with 10% Tamiya Clear Green and then add lots of thinner to this mix (I used Tamiya thinner but Vallejo thinner would work fine as well). The mix should be very watery, about the same consistency as a Citadel wash paint (i.e. basically the consistency of water). Spray the whole model with this mix using the airbrush, including recesses. Try and get an even coat all over to allow the silver underneath to show through.

For infantry, I turn the model upside down and spray from that angle, to hit the lower areas of arms, legs, and the bottom of the backpack. The very bottom corner of the shoulder pads can be sprayed blue as well, if your airbrush allows for precise action.

For vehicles, spray the bottom 25% of the side panels, the entire underneath, and also wherever else shadows would appear, such as gaps between armour plates.

Similar to step 7, we’ll now mix just Tamiya Clear Green with thinner and spray this just onto the raised sections of the model, such as the top 25% of the sides of vehicles, and raised armour plates.

For infantry, I stand the model up normally, then spray down onto it from above. Now the transition from blue on the lower parts, through turquoise, and onto green on the raised areas should be seen.

This step adds a final highlight to the turquoise to bring some of the silver back through. Mix 80% Tamilya Clear Blue with 20% Vallejo Game Air Silver, and again add a good amount of thinner. Spray this mix, very sparingly, onto the highest raised areas of the model. Be careful to avoid spraying completely over the green we applied in step 7 – this blue/silver mix should just be on the armour plates that would reflect the most light.

On infantry, a quick spray from above onto the top of the shoulder pads, top of the backpack, and top of the head is ample. Less is more at this stage! Steps 5-8 are shown in the second picture here.

Take off all the masking tape and blue tac. Highlight, using a brush, the edges of all the non-turquoise areas of the model such as guns and shoulder pad trims using Vallejo Game Air Silver. Do not highlight the tracks, gun barrels or engine. Pick out all the rivets and other small details with silver as well.

There’s a lot of rivets on the Glaive…

Damage, Weathering and other Finishing Touches

Now we are going to prepare the model for some shading, and give it a good shine in the process. Spray the whole model with two or three thin coats of Gloss Varnish (and yes, I am serious!), making sure you wait till each coat is dry before applying the next. The reason for this is twofold, firstly, this will make the model shine and emphasise the metallic nature of the colour, and secondly it will seal in all the paint beneath in preparation for the next stage. Do not skip the gloss varnishing, if you do, all your work will be ruined by step 11!

Now comes the shading. Create a mix of 90% white spirit with 10% Black Oil Paint (any make is fine, just make sure it is oil based). This is our oil wash and should be about the same consistency as a Citadel wash. The reason for using this oil wash is that it runs much more freely, allowing for quick and accurate shading of panel lines, and more importantly, the wash will not sit on the raised areas of the model in the same way a normal wash will. This allows that gorgeous shiny turquoise to show through without nasty wash marks all over it!

Using a big brush, wash over all the non-turquoise areas of the model (guns, tracks) in the same way as a normal wash – these areas can afford to look a bit mucky. Then using a smaller brush, simply tap the wash into the seams between armour plates, around rivets, and into any other crevice (stop sniggering) on the turquoise areas. The oil should woosh from the brush, and instantly run into all the cracks giving nice neat shading. Once done, you can use a piece of sponge to mop up any of the oil wash that is still sitting on raised areas. There’s loads of videos on YouTube that show this technique clearly;

Wait at least 24 for hours for the oil wash to dry. Now we are going to give the turquoise one last glaze before moving on. Mix 30% Tamiya Clear Blue with 70% Glaze Medium (I used Vallejo but any make will do). Again this mix should be very watery. In a smooth motion, evenly apply this glaze to the turquoise parts of the model.

There’s three reasons for this glaze. Firstly, it will enrich the turquoise beneath and blend the colours together smoothly, it will take a small amount of the shine away from the gloss varnish to make it a bit more realistic, and it also tones down the metallic nature of the previous highlight just a tiny amount, meaning the chipping we’ll apply later will appear more of a contrast.

I painted a hydra and a chained ‘A’ on each model and a 3 headed Hydra by hand, using Citadel White Scar paint but feel free to use transfers if you prefer. I thought I would take the opportunity for some much overdue practice at painting freehand!

Apply small chips to the edge of the model’s armour plates with Citadel Leadbelcher paint (or equivalent) using the edge of a sponge. The sponge will create smaller chips than is possible with a brush and is one of my favourite quick and easy methods of getting things to look battle damaged. I also used a normal HB pencil to scratch across armour plates for super-fine scrapes and ricochets.

Applying weathering to the Glaive’s tracks

The finished Glaive, sitting proud with the rest of my Alpha Legion

Probably my favourite superheavy vehicle, the Glaive looks great with the rest of my army

The Glaive makes for a great centerpiece of the army

Tips and tricks on How to paint Alpha Legion

Batch paint. With this method, it is very important that the mixes and thickness of coats applied to models in your army are consistent, so I would recommend batch painting as many models as possible. This will ensure they all look coherent together – it is very easy to get a mix wrong and very hard to fix it without starting over!

The method might seem long and arduous, but it actually doesn’t take too long because it is mainly airbrushing with minimal brush work, so it is relatively quick to get units done, I promise!

Hopefully this guide on how to paint Alpha Legion has been helpful and here’s a picture of my army so far.

Feel free to follow me on Instagram coilsofthehydra and let me know if you have any comments, questions or criticism! Cheers! 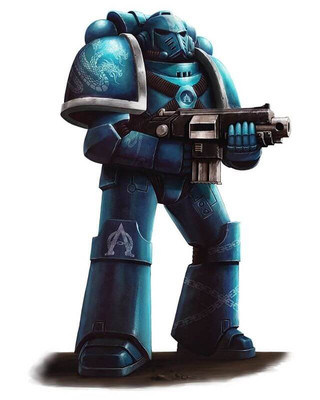 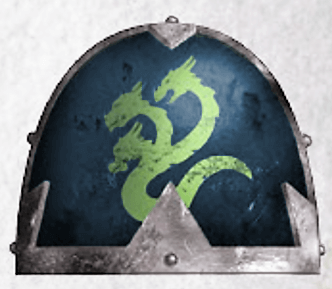 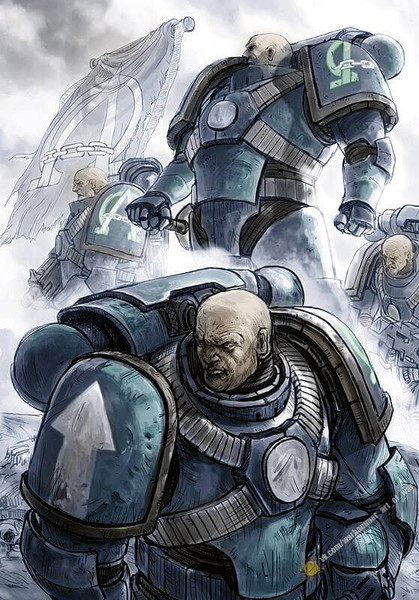 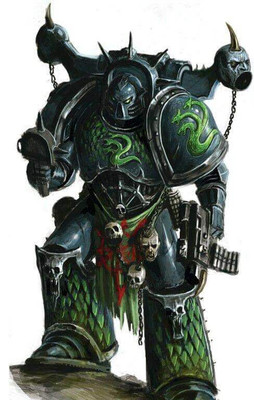 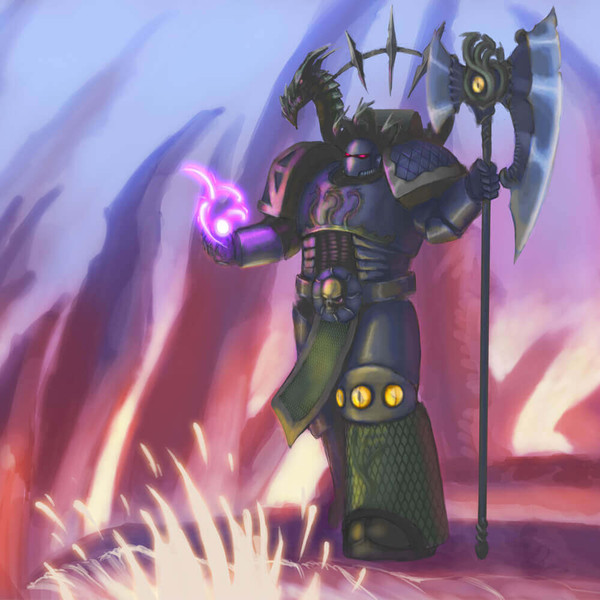 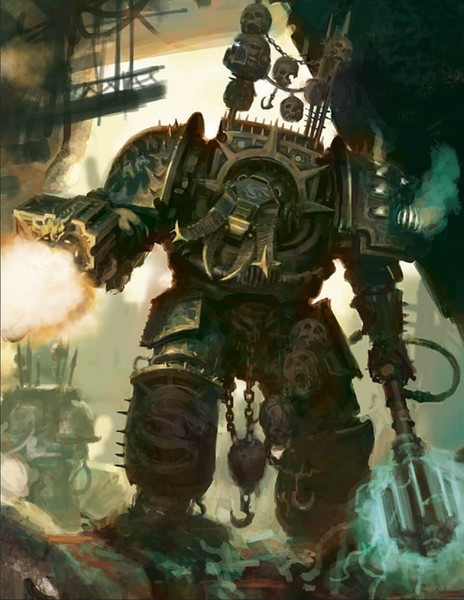 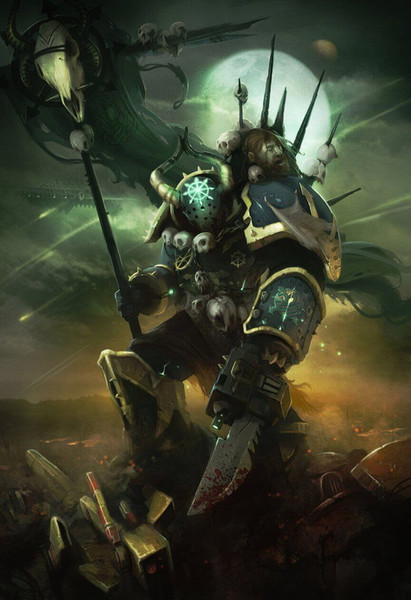